No, we aren't all just the same.

"We're all the same," lectures the Kindergarten teacher to her captive brood.

What a contemptible lie.  We're obviously all different, as a cursory look at even just a few people will show.  There are only two reasons to push this lie on small children.

1.  To teach empathy.  If the other kids is just like me, he won't like it when I bite him and take his toy truck.

2.  To teach Marxism.  We are all the same, equal, interchangeable - everyone everywhere.  Where we are not the same, there is disharmony and strife, and the disharmonious counterrevolutionaries must be eliminated.

2a.  To teach Marxist nihilism.  We are all interchangeable.  We are merely cogs in the great machine of society.  If any one is out of alignment, it must be repaired removed from the machine.  We, each one of us, are replaceable.  It is required for the more perfect functioning of the machine.  After all, you must be JUST LIKE ME.  The architects and mechanics who service the machine and teach us of its ways say so.

2b.  To teach Marxist internationalism.  We are all the same - you me, that guy over there.  Even those people on the other side of the world who don't look like us, talk like us, pray like us, or live like us.  Despite the obvious superficial differences, we are truly all the same.  Even if they say they are nothing like us - they are just mistaken.  They are really just like us.  When they say they want to kill us all, that's just talk.  They really want to come over here and give us all hugs.  After all, we're all the same, so they must be JUST LIKE ME.

2c.  To teach Marxist critical theory.  We're all the same, really.  Those people over there - the ones who wallow in their own filth, rut like animals, and kill and enslave each other as a hobby?  I wouldn't do that, and they're JUST LIKE ME.  So somebody else must be forcing them to do that.  Some evil force must be causing all that misery.  Aha!  Dead white, western, Christian, probably Anglo men invaded their lands long ago, perverting their beautiful native cultures into this parody of human existence.  Why would they do that?  They must all have been evil, causing all that death and misery for their own amusement!  "Death to the white man!" said the white man.  This is taught in our schools, and in our universities.  Young people are taught not to believe their lying eyes, that 2+2=5, that facts and logic are deeply racist and sexist.  They are taught to conform and agree with authority.  "Death to the White Man!  Death to Western Imperialism!  Death to Christianity!  Death to Free Market Capitalism!  Death to America!  Death!"

2d.  To teach Marxist feminism.  Women and men are equals, therefore they are the same.  I am a woman, so you must behave in all ways like me.  But we have all these men not behaving like women.  Gay men do, to a degree, and that's why we like them so much.  Transvestites behave like us even more.  (Some of them are more like a woman than I am, those bitches.)  Men must be defective women, because they are terrible at being JUST LIKE ME.  That's bad.  Men have to be adjusted and corrected.  Then again, do we really need the men?  I have all these other women around to keep me company, and to share my bed at night.  Men are icky.  Sex is icky.  Sex is rape, because although we're all equal and the same, and I am a powerful woman, men have all the power, and I can't make decisions or stand up for myself, poor, poor, helpless, powerful me.

So, the next time you hear someone comparing two different groups of people on the same terms, remember what they're trying to sell you.

Marxists (progressives, liberals, communists, socialists, Fabians, social democrats, whatever they're calling themselves this week) do not have our best interests at heart.  They believe in a wicked religion (Marxism is a religion, not a method of economics), which  like Islam, must spread to encompass the whole world.  Their god commands them to.  All unbelievers will be offered a choice of conversion or death.  Some unbelievers, more useful and compliant than others, will be kept as slaves or highly regulated serfs.

This is why Marxism and Islam get along so well.  They share similar goals and methods, and their belief systems are somewhat compatible.  Naturally, when they have jointly conquered the world, each will struggle to overthrow the other, but that is a concern for the far future.  For now, they both chant "Death to America!  Death!"

Posted by McChuck at 6:48 AM No comments:

I can't make it work

FTL -Faster than light travel.  I can't make it work.  I thought I had an idea, but the math doesn't work out.  Walk with me.  The thought structure went like this.

Outside a black hole, space-time uses real number for the proximity of one bit of space-time to another.  This is limited by the speed of light (C, defined in units equating it to 1) to being a number between C (theoretical, requires the complete absence of all gravity) and 0.  0 is what you get at the event horizon of a black hole - space and time appear to come to a halt.  Inside a black hole, the proximity is measured using imaginary numbers.  As the gravity increases, the imaginary number gets larger arbitrarily, eventually making the inside of a black hole larger than the outside. 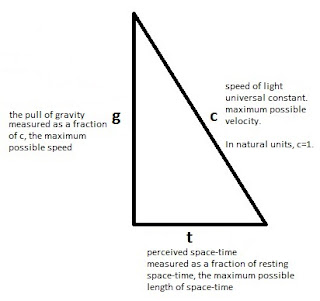 As G exceeds 1, t drops below zero and takes on imaginary values.  As G surpasses the square root of two, t must surpass 1i to balance the equation.  The speed of light remains constant, but the nature of space-time constantly changes.  What does this really look like?  No way to tell without experimentation - and I'm not planning on volunteering.


So, I pondered, if we can use imaginary numbers to represent space-time inside a black hole, might there be some way to use that principle outside the black hole?  You can't exceed the speed of light, but could you, just possibly, change the apparent speed of light by altering the properties of local space-time?

I started down this road of thought, imagining how time would accelerate for the traveler in relation to those left behind, and how this could be carefully compensated for by increasing the traveler's speed to slow down their rate of time to match.  That's when I started reviewing the math, and encountered the error in the system.

Complex numbers would be required.  That doesn't seem to work in normal space.  And anyways, when you square a complex number, you get another complex number.  It doesn't simplify into a real like an imaginary number does.

Even if you could balance the equation by using complex gravity (I'm not certain this is mathematically possible), what the heck would that even look like?  Where would it come from?  It's entirely too much handwavium.  Even inside a supermassive black hole, gravity is still measured in real numbers, not imaginary, much less complex.

This realization burst the bubble of my glorious dream of fast interstellar travel.  Stupid, unforgiving math.

Posted by McChuck at 5:52 AM No comments: