A picture is worth a thousand words. 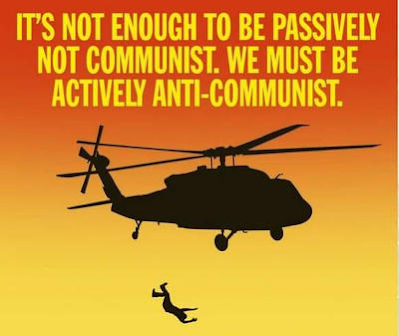 From Tempest in a Teardrop.  Stolen shamelessly.

Posted by McChuck at 8:20 AM No comments:

Posted by McChuck at 7:31 AM No comments:

Why does the military need officers?

Way back around the turn of the century, an international military exhibition was held in Kazakhstan. All the regional militaries, plus the US, sent a company of paratroopers to drop, assemble, move to their starting line, and assault an objective. The troops dropped in front of bleachers full of senior officers from their respective militaries.

The US troops dropped last in the formation. They assembled, formed up, assaulted the objective, consolidated, dug in, and requested follow on orders before the next nation's company made it to the line of demarcation.

After that very impressive display, the foreign officers asked to meet the American officers in charge. They were quite surprised to discover that every single officer of that company, being a Captain and three Lieutenants, were in the bleachers with them. The Airborne (Ranger) company had conducted the entire mission with its NCOs in charge, from initial planning to final execution.

On a day to day basis, the entire US military would work much, much better if there were no officers to interfere.  The average officer does little but interfere with the efficient functioning of his own unit. The poor officer manages his unit into destruction while actively disrupting any nearby units. The good officer protects his unit from other predators officers.