This is the greatest bit of scientific hokum I've run across in quite a while.  The delayed choice quantum eraser experiments are, to me, intensely amusing bits of scientific theater and sleight-of-hand.

The problem is, the scientists doing and reviewing these experiments don't get the joke.  They think it's real.

To review, a delayed choice quantum eraser involves using a clever arrangement of beam splitters and mirrors to identify (or not) which path a photon travels through, well, let's call it a maze.  They then claim than when we human's have knowledge of which path the photon took, it acts like a particle, but when we humans don't know which path it took, it acts like a wave.  Oh, and in some experiments, there appears to be a backwards in time flow of information from one part of the experiment to another.

This all has caused great consternation and debate in scientific circles.  Which just goes to show that most scientists aren't all that smart.

They all ignore one very simple thing:  scientific instruments aren't Platonian ideal instruments.  They are physical things.  To be specific, beam splitters work by selecting some photons to transmit, and some to select.  This is a mechanical action.  This selection is what seems to cause the interference patterns in these experiments.  That's it.  All these experiments serve simply to show that, by golly, the beam splitter selectively split the beam into two parts.

They completely overlook the physical nature of the half-silvered mirror.  It, by its nature and design, selects some photons for one path or another (even though the wave divides and travels both).  The specific properties of each photon determines which path it is more likely to travel.  These paths are thus deterministic but unknowable.  Similarly configured photons will follow similar paths.  And thus, the apparent interference pattern emerges from the simple act of selecting photons by the beam splitters.
Posted by McChuck at 4:16 AM No comments: 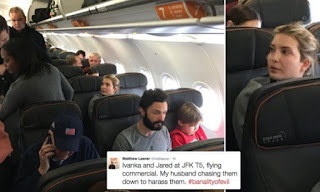 Tweeted picture from the faggot's "husband", bragging how his butt buddy was harassing a young woman and her small children because he didn't like the outcome of an election.  Oh, and the asshole did this while carrying a small child.  Who gives a child to a gay man, anyways?  Oh, wait, New York now gives gay couples preference for all adoptions.  Because we need more screwed up (and with) kids, apparently.  (Not all faggots fuck little boys, but all the men who fuck little boys are faggots.  That's how they make more faggots - teach them while they're young.)

Homosexuality used to be considered a mental illness, as it obviously is.  Faggots tend to have other mental problems.  It's one of the reasons (besides being creepy) that they were barred from military service, and prevented from holding a security clearance.  They're inherently unstable.  And given that they are such a small percentage of the population (under 2%, around 3% including bisexuals), the risks they pose is nowhere near the possible reward of the value and quality of their work.  That and the fact that normal people are creeped out by them and don't want to be near them.  Especially sleeping and showering with some skeevy creep who wants to fuck you in the ass.

I knew several gay people in the Army.  Not a single one of them was worth the powder to blow them up, as my dad would say.  They caused no end of trouble, and were terrible at their jobs.  Especially the officers - uniformly completely terrible, faggots and lesbians alike.

Progressivism/liberalism is also a kind of mental disease.  It's victims deserve treatment, because it can be cured.  When the victims of this highly destructive malady are identified, they should be immediately confined to an appropriate treatment facility for long term care.  Unfortunately, faggotry and lesbianism simply aren't treatable.
Posted by McChuck at 6:24 AM No comments:

More on the fundamental nature of the universe

The understanding I have of the fundamental forces of the universe has advanced a bit, so I thought I'd share.  To my understanding, the fundamental forces are simple and elegant.  Momentum and gravity and 'dark energy' are all related.  'Dark matter' may be an emergent property of these forces.  I've got just about everything here, in one nice, neat, relatively simple package.

Here is a crudely drawn picture of what I'm going to be talking about.

Assume an energy field, existing everywhere.  That field has a positive strength.  This is the fundamental nature of space-time.

Matter draws its energy from this field.  The field adjusts by lowering the energy level around the particle of matter, with the amount of drop decreasing in a square law fashion.  This is gravity.  All things seek to occupy a lower energy level, and require force to make them go up the energy gradient.  They gain energy by going down the gradient.

Momentum is a directional wave in the ambient energy, with the lower end of the wave in the direction of movement.  Above, it is shown as the red curve.  In reality, it is three dimensional, with relative null points at 90 degrees to forward motion.  (Think of a slanted bowl.)  Thus, particles are forced forward towards to lower energy level, and resist going backwards towards the higher energy level.  This also explains the red and blue shift of emitted photons - they gain energy if going forwards, are neutral at 90 degrees to motion, and lose energy if emitted backwards.

The blue dot at the center is the particle, whatever it may be.  The wave around it is its momentum - the higher the momentum, the steeper and more narrow the curve.  More massive particles require more energy to influence their momentum wave.  This implies that their waves have a shorter wavelength, which matches with observations.  The more massive and faster a particle is, the more fixed its location is - the shorter its position wavelength.  Remember, shorter wavelengths require more energy.

Here's the really cool part - space-time dilation is built into the picture.  Using natural units (speed of light equals 1, no time/space dilation equals 1), the sine of the angle is the velocity, and the cosine of the angle is perceived time and length.  Thus, a theoretical non-moving particle in an area of no gravity (no energy differentials at all) would have a perfectly flat wave (nonexistent, really) with sine 0 and cosine 1.  This is the fastest possible perception of time and distance (1), and the slowest possible speed (0).  Conversely, a photon's momentum wave is a verticle discontinuity of width zero.  It has a sine of 1 (fastest possible velocity) and a cosine of 0 (lowest possible perception of time and distance).  All of a photon's energy is in its spin, not its forward movement.

So, the universal energy accounts for dark energy.  It pushes matter away from it, the more you have of it.  So that checks out.  The fun question is - as the universe expands, does this energy level drop, or is it created out of nothing?  According to the recent research I've seen, it seems to stay steady, appearing out of nothing.  This violates the principle of conservation of energy on a large scale, but not so much at the local level.  So the universe isn't a pot of water, with the level going down as the pot grows larger.  It seems to be more of a sieve in a larger pool of water, with the level staying steady even as the vessel grows larger.

Here's where things get speculative.  Imagine that the energy acts as a fluid.  Yes, it can move on its own.  That's where gravity waves come from, and the apparent existence of dark matter.  If the energy field is a fluid, it can and does move.  This movement is caused entirely by the existence and movement of matter, which we see as gravity. The fluid energy wouldn't move at any scale we would perceive, but it would have large scale movement.  Say, with the steady spin of a spiral galaxy.  The matter in a proto-galaxy would begin to coalesce and spin.  That causes the emergence of the spiral arm structure.  After a bit of resistance, the fluid energy would also begin to spin, eventually keeping up with the matter.  This fixes the spin of the arms like a record player.  The entire construct would spin like a record, with fixed axial rotation, instead of like water going down a drain.

To see this in action, fill a pot of water.  Sprinkle herbs on top.  Now, stick a spoon in the center of the pot and twirl it.  The herbs will spin around, faster and faster at the center, forming spirals.  The spirals will eventually stabilize as the entire pot of water eventually moves at a fixed axial rate of rotation.

Again, this part is speculative, but seems to agree with observations and basic principles.


Oh, and light speed limits don't apply to spin, just momentum.  They also don't seem to apply to the ambient energy levels, just the particles in them.  Gravity works instantly, across the entire galaxy, ignoring all limits.  Waves in the energy, however, must respect the speed limit.

Why no, I can't even begin to express this mathematically.  I don't think in math.  I think in pictures, and thus geometry.  (I choked at three dimensional calculus.  I couldn't see the shapes described by the equations.)