OK, so I finally found out why I wasn't finding references to the triangular relationship between velocity/gravity, spacetime, and C (speed of light).  That's because it's not mentioned in relativity articles - it's obliquely referenced in descriptions of 4-position/velocity/momentum.  This seems to be another case of scientists not seeing the forest for the trees.  (It's not just scientists - it's really quite common.  When I went back to the engineering department of Football State U, I noticed that literally none of the electronics engineering students actually understood what all the waveforms being described so carefully by the complex math actually looked like, or how they acted.  But boy, could they do the math.)

Anyway, I recently was pondering on this subject again.  (No, I don't have much of a life, thanks for mentioning it.)  I now have a greater understanding (hopefully correct) about the relationship between mass, energy, spacetime, and gravity.  LEt's start with merging the two graphs - velocity and gravity interacting with spacetime via C.  Here's the simple chart. 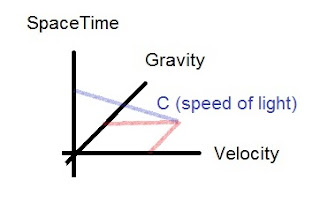 Velocity and Gravity (red) are measured in fractions of C, and SpaceTime is measured in fraction of the reference frame (or a motionless, gravity-free baseline).  Note how the combination of gravity and velocity have a fixed relationship with SpaceTime, as determined by the universal constant, C (here in blue).  Relativity really is just this simple.

As far as the causal relationship between mass, energy, SpaceTime, and gravity, I have a fairly simple, elegant solution.  (Elegance is not necessarily an indicator of correctness, but correct theories are normally elegant.)  Matter is energy - a whole lot of energy (E=mC^2).  That energy has to come from somewhere.  It is drawn from SpaceTime.  This creates an energy imbalance, which is instantly corrected by energy flowing into the area of the matter.  This simplifies as a flow of time towards the mass.

Gravity isn't so much a force emanating from a mass, as mass creates a depression in SpaceTime energy levels that is filled by energy pouring into it, resulting in a directional-time force we recognize as gravity.  A fine distinction, perhaps, but to my mind, a crucial one.  It is the difference between light emanating from a bulb, and water rushing down a drain.

The greater the mass, the greater the energy, the more energy it removes from local SpaceTime, the more energy the surrounding spacetime pours in to try to correct the imbalance.  This creates an attractive force that is proportional to the mass, in inversely proportional to the square of the distance.  The amount of force per unit mass is tiny, because it has literally the entire universe to pull from to try to rebalance the energy levels, so the local imbalance ends up being very small.

Yes, I know I'm probably not doing a good job explaining this.  It's quite clear in my head, but the words just don't seem to work.  This is very much case of things seeking a lower energy level.
Posted by McChuck at 12:17 PM No comments: