This is the true face of Islam. 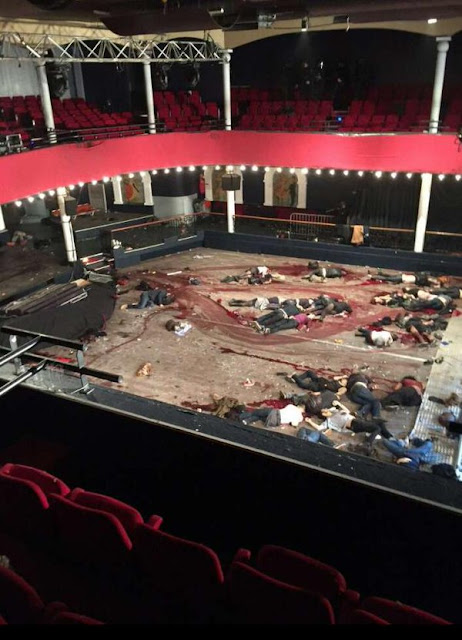 Believe them when they say they hate us, that they want us to die.

Excerpts from the Quran, Chapter 9:
[5] Then, when the sacred months have passed, slay the idolaters wherever ye find them, and take them (captive), and besiege them, and prepare for them each ambush. But if they repent and establish worship and pay the poor-due, then leave their way free. Lo! Allah is Forgiving, Merciful.
[41] Go forth, light-armed and heavy-armed, and strive with your wealth and your lives in the way of Allah! That is best for you if ye but knew.
[52] Say: Can ye await for us aught save one of two good things (death or victory in Allah's way)? while we await for you that Allah will afflict you with a doom from Him or at our hands. Await then! Lo! We are awaiting with you.
[55] So let not their riches nor their children please thee (O Muhammad). Allah thereby intendeth but to punish them in the life of the world and that their souls shall pass away while they are disbelievers.

From Surah 5:
[33] The only reward of those who make war upon Allah and His messenger and strive after corruption in the land will be that they will be killed or crucified, or have their hands and feet on alternate sides cut off, or will be expelled out of the land. Such will be their degradation in the world, and in the Hereafter theirs will be an awful doom; [34] Save those who repent before ye overpower them. For know that Allah is Forgiving, Merciful. [35] O ye who believe! Be mindful of your duty to Allah, and seek the way of approach unto Him, and strive in His way in order that ye may succeed. [36] As for those who disbelieve, lo! if all that is in the earth were theirs, and as much again therewith, to ransom them from the doom on the Day of Resurrection, it would not be accepted from them. Theirs will be a painful doom.

From Surah 8:
[9] When ye sought help of your Lord and He answered you (saying): I will help you with a thousand of the angels, rank on rank.
[10] Allah appointed it only as good tidings, and that your hearts thereby might be at rest. Victory cometh only by the help of Allah. Lo! Allah is Mighty, Wise.
[11] When He made the slumber fall upon you as a reassurance from him and sent down water from the sky upon you, that thereby He might purify you, and remove from you the fear of Satan, and make strong your hearts and firm (your) feet thereby.
[12] When thy Lord inspired the angels, (saying): I am with you. So make those who believe stand firm. I will throw fear into the hearts of those who disbelieve. Then smite the necks and smite of them each finger.
[13] That is because they opposed Allah and His messenger. Whoso opposeth Allah and His messenger, (for him) lo! Allah is severe in punishment.
[14] That (is the award), so taste it, and (know) that for disbelievers is the torment of the Fire.

From Surah 47:
[1] Those who disbelieve and turn (men) from the way of Allah, He rendereth their actions vain.
[2] And those who believe and do good works and believe in that which is revealed unto Muhammad - and it is the truth from their Lord - He riddeth them of their ill-deeds and improveth their state.
[3] That is because those who disbelieve follow falsehood and because those who believe follow the truth from their Lord. Thus Allah coineth their similitudes for mankind.
[4] Now when ye meet in battle those who disbelieve, then it is smiting of the necks until, when ye have routed them, then making fast of bonds; and afterward either grace or ransom till the war lay down its burdens. That (is the ordinance). And if Allah willed He could have punished them (without you) but (thus it is ordained) that He may try some of you by means of others. And those who are slain in the way of Allah, He rendereth not their actions vain.
Posted by McChuck at 4:42 PM No comments:

There is no way to travel at a speed faster than that of light.

But what if that speed is varies by the properties of local space.

This is the loophole that holds out a possibility of effectively-FTL travel.

Outside a black hole, spacetime is measured with real numbers.  Inside, you have to use complex numbers, as the gravity increases beyond the limits of the speed of light.  Review - with the speed of light, C, the relationship between gravity G and spacetime density D (lower is more dense in this scale) becomes G squared plus D squared = C squared.  With units chosen to make the speed of light 1, this simplifies to G^2 + D^2 = 1, or D = Sqrt(1 - G^2).  This means that when G>1 (as it does inside an event boundary), D must begin using complex numbers.  As G increases to 1.414... the complex value approaches 1 (the density of normal spacetime in the absence of gravity distortions), and then exponentially surpasses it.  This means that the density of spacetime, in the presence of sufficient gravity, is less than that of spacetime in the absence of gravity, and this lack of density increases exponentially as the gravity increases.  So, light would travel exponentially faster in these regions.

Black holes keep getting bigger on the inside as their gravity increases.  The speed of light is constant, but the local spacetime properties change with gravity, to make it effectively faster or slower.


If some means could be found to make a portion of normal (real number) spacetime exhibit the properties of complex spacetime, in a controllable fashion, we would have discovered an alternate reality similar to Star Trek's® subspace, where the speed of light would be warped to seem faster.

There doesn't seem to be any easy way to do this - after all, if it were easy, we would probably notice it happening somewhere.  Unless you count ghostly apparitions and spirits as being able to transit through complex space, this sort of behavior is simply unobserved in everyday life.  And I don't know of any way to predict what the physical laws would be like in a universe ruled by complex numbers.

Hopefully, some clever engineer will figure out how to do this someday, and we could then journey to other stars in less than a lifetime.

Fred hits it with both barrels

I know I'm not the best of writers, so I'll just let Fred comment on this.  He's much more entertaining (while being informative) than I will probably ever be.  He's spent a lifetime writing, after all.


How about another take on the subject?  This time by an actual teacher.

And here's what Wikipedia (that bastion of conservative thought - not) has to say on the subject of racial IQ differences.

Main article: Achievement gap in the United States
Rushton & Jensen (2005) wrote that, in the United States, self-identified blacks and whites have been the subjects of the greatest number of studies. They stated that the black-white IQ difference is about 15 to 18 points or 1 to 1.1 standard deviations (SDs), which implies that between 11 and 16 percent of the black population have an IQ above 100 (the general population median). According to Arthur Jensen and J. Philippe Rushton the black-white IQ difference is largest on those components of IQ tests that are claimed best to represent the general intelligence factor g.[44] The 1996 APA report "Intelligence: Knowns and Unknowns" and the 1994 editorial statement "Mainstream Science on Intelligence" gave more or less similar estimates.[45][46] Roth et al. (2001), in a review of the results of a total of 6,246,729 participants on other tests of cognitive ability or aptitude, found a difference in mean IQ scores between blacks and whites of 1.1 SD. Consistent results were found for college and university application tests such as the Scholastic Aptitude Test (N = 2.4 million) and Graduate Record Examination (N = 2.3 million), as well as for tests of job applicants in corporate sections (N = 0.5 million) and in the military (N = 0.4 million).[47]
North East Asians have tended to score relatively higher on visuospatial subtests with lower scores in verbal subtests while Ashkenazi Jews score higher in verbal and reasoning subtests with lower scores in visuospatial subtests. The few Amerindian populations who have been systematically tested, including Arctic Natives, tend to score worse on average than white populations but better on average than black populations.[47]
The racial groups studied in the United States and Europe are not necessarily representative samples for populations in other parts of the world. Cultural differences may also factor in IQ test performance and outcomes. Therefore, results in the United States and Europe do not necessarily correlate to results in other populations.[48]

How about a picture?  Below are the racial IQ distributions.  Again from Wikipedia - "Mental deficiency used to be divided into the following sub-classifications, but these labels began to be abused by the public and are now largely obsolete: Borderline Deficiency (IQ 70-80), Moron (IQ 50-69), Imbecile (IQ 20-49) and Idiot (below 20). Mental deficiency is now generally called mental retardation."

Note that even with the optimistic mean IQ of 85, 37% of American Blacks have an IQ of 80 or less, and fully one in six are legally retarded.

Progressives claim to want to have a "conversation on race," but what they really want to do is tell everybody to shut up their filthy 'lying' mouths and stop talking about this reality crap.  They can't handle the truth.  Speaking the truth to a progressive is like throwing open the curtains and letting the sun shine upon a vampire.  Except not as effective, because they don't burst into flames and die - they simple ignore inconvenient truths in favor of obeying the narrative of the moment.

But the people listening in will see who uses facts and rational argument, and who acts like a spoiled 3 year old throwing a tantrum when they don't hear the answer they were expecting.

The truth shall make you free.  Embrace the power of telling a progressive "I don't care." when they talk about hurt feelings.

Posted by McChuck at 8:03 AM No comments: